Barreaus are from Bordeaux, France

NEWS: I have just recently received some information that confirms that Alexander Barreau did come from Bordeaux in France, and that perhaps he was known by the name, or nickname, of ‘Pierre‘, and that he may well have “jumped ship” in order to escape service in the French navy or army. This was mid 19th century when there was a lot of military action in Europe, so it is understandable why he did so. It appears of if his brother (yes, we have info on his siblings) may have died while in military service in the 1840s. As there is no mention of the name ‘Pierre’ in Alexander’s records in Australia, and yet there is no mention of ‘Alexander’ in the two letters we have, then maybe he took on the name ‘Alexander’, or at least did not refer to the name ‘Pierre’ after he had deserted.

I have updated information on Alexander Pierre Barreau in his bio, click on this link to get there.

Discovered this article in the Australian Dictionary of Biography, of Henry Hamilton, son of Richard Hamilton, who started the Hamilton Ewell Winery, located on the Curtis farm, which Richard Hamilton began when he first arrived in Adelaide in 1837. This is now located in the middle of Adelaide. The office for the Hamilton Ewell Vineyards are still there, although I assume the actual vineyards are not.

Pretty impressed that we made it to the ADB.
Click here: Henry Hamilton

See the current website for the Hamilton Ewell Vineyard.

Other vineyards connected to the Hamiltons are below.

I have found an extra piece of information to fill out the picture of Elizabeth Catherine Hamilton, who married 1) Henry Nell, 2) Alexander Barreau.

It is regards to the death of her first husband, Henry Nell. He died in June, in Singapore. His occupation was recorded as innkeeper. I found this information from the Find a Grave website.

At age 23 Elizabeth accompanied her parents to Adelaide in October, 1837. Initially she was working on the land with her husband, Henry, and near her parents. But at some stage it seems Elizabeth and Henry were living and working in Singapore.

Only a few months after arriving in Adelaide, in July 1838, Elizabeth married Henry Nell, who was aged 42. Henry was a widow with 2 boys, aged 9 and 8. While initially he took up land near the Hamiltons, it seems at some stage he also was running a hotel in Singapore. They had two children who were born in SA in 1840 and 1842.

Whether Henry had owned the hotel in Singapore or was only working there is unknown. He may have owned the inn for some time and travelled between Singapore and South Australia.

On June 10, 1844 Henry died and was buried in Singapore. His death record records that he was an innkeeper. There are some stories I have heard from other researchers that he perhaps died in a shipping accident on the way to Singapore, but I don’t know the sources for this. I will have to do more research into that. If anyone reading this has any information please do let us know (comment below).

Henry is buried in Fort Canning Green, Singapore, in 1844.

This was a Christian cemetery located in the Fort Canning Park, in Singapore, open between 1834 and 1868. In 1954 the cemetery was converted to a park and most of the graves exhumed and the tablets placed into the walls. It appears the headstone for Henry Nell is one of those. See Find a Grave for further information.

One year later Elizabeth remarried, in Singapore. She married another hotel keeper, Alexander Barreau. One cannot help but think Alexander and Henry were connected in some way, perhaps working in, or owning, the same hotel.

Elizabeth was now a widow and looking after several children. This could account for her marrying relatively quickly after her husband’s death. Widows, especially with children, were very vulnerable.

As stated earlier, Elizabeth and Henry had two children, all born in SA.  In November of 1844, just five months after Henry’s death, she gave birth to another child, Hamilton. She had the boy registered in SA. This would indicate that she had returned to SA by the time of his birth, or soon after. This supports the idea that perhaps Henry Nell had had a stronger connection with the inn in Singapore than just working in it, since Elizabeth had returned from Singapore, had the child, and by July the next year was back in Singapore and marrying another hotelkeeper.

By 1847 Elizabeth and Alexander were back in Adelaide, as their first child was born in June of that year. They appeared to have remained in Adelaide.

It would be interesting to know how extensive the involvement was in the hotel business, whether Henry owned the hotel, and perhaps even more hotels, or if he simply worked there.

Elizabeth continued on and outlived both husbands by twenty two years. She died in 1898 and is buried in Cheltenham Cemetery in Adelaide (it says she is cremated, but the authority assured me that is incorrect – a data input error).

Photos of ancestors – Barreau and Hamilton – at SASL

I was contacted by the SA State Library recently, with some information on some old photos they have. They are photos of ‘Old Colonists’, ie, the first European settlers in SA. The list they spoke of is of women, and among the photos are two photos of ancestors of mine.

The first photo is of Elizabeth Barreau (nee Hamilton). She married Alexander Barreau in 1845.

Elizabeth came from England (Kent) to SA in 1837 with her parents Richard Hamilton and Ann Hamilton (nee Holmes). The second photo is of Ann Hamilton.

Here is a link to the page at the SASL (South Australia State Library) that has all the photos of the ‘Old Colonists’.

Found a very useful article on researching parish records in the UK with tips of baptism and marriage ages etc.

A convict in the family?

I think we may have struck gold with our Dawson family history research.  Well, a little nugget.

John Hughes Dawson had a great uncle called Uncle Tom – or rather, Thomas Hughes.  He was JHD’s grandmother’s brother.  Well, Thomas married Mary Bax, and one of their children, named William, worked as an agricultural labourer in Kent, in the Isle of Thanet, in the long tradition of the Dawsons and no doubt the Hughes.

But of course, the late 18th and early 19th century saw the agricultural and industrial revolutions having their devastating effect on traditional farm life and cottage industries throughout rural England.  This was a major reason for the huge increase in crime, due to people being forced off the land due to changes in agricultural practices.  These changes produced more food, but provided less employment.  The out-of-workers then headed to the cities to try and find work in the new industrial developments, and many of them failed, and even those who succeeded were working in terrible conditions for little pay.  Just think ‘Oliver Twist’.

Kent suffered quite badly, and especially that isolated end bit, the Isle of Thanet.  Well, at one time in Thanet there was an uprising where a number of angry and disgruntled local workers attacked some of the new-fangled ‘threshing-machines’ used on the farms, part of the agricultural revolution.  These were an example of the type of machines putting agricultural labourers out of work.

These uprisings were known as the ‘Swing Riots’ of 1830.  Many of those involved were convicted and transported to NSW.

And guess who was one of those convicts?  Our William Hughes, son of Thomas, nephew to Anne Hughes, and first cousin once removed to John Hughes Dawson.

So – an amazing event, someone with pure South Australian ancestry, has found a convict in her line.  OK, he is not direct, but he is there, and I will claim him!  Especially since he was convicted for such a noble cause, an early socialist- type, good work William!

Those UK census records are such pieces of gold for genealogists.

In the 1841 Census, George Edmund West was recorded in the census, with his wife, Mary Ann (Allen) West and two children, Jane and George.

George was working as a carpenter.  His neighbours were working as painter, coachmaker and smith – all similar types of trades.

They lived in Great Tichfield Street, in London.  As far as I can work out from the unbelievably complicated British parishes and counties and boroughs and all that stuff – the street is now in Westminster but in 1841 was in St Marylebone.  If I am wrong, please, any of my English cousins, correct me!

It seems Wikipedia has an entry on Great Tichfield Street.  It says that in the mid 19th century – the very time of this census – this street was well known for

Sounds like your typical Dickensian street.  It was part of the maddening changes that occurred in London and Britain due to the industrial revolution.

George later went onto the work as an engraver and ultimately took up the new art of photography.  He later moved down to Gosport in Hampshire.

His story illustrates the great changes that were occurring in people’s lives during the 19th century.

Here is an map Great Tichfield Street from 1827, made by Christopher and John Greenwood at the time.  The northern part of the street was named Cirencester Place in this map. [from Wikipedia]. 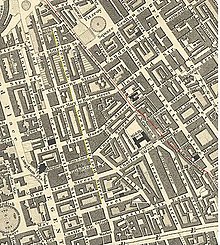 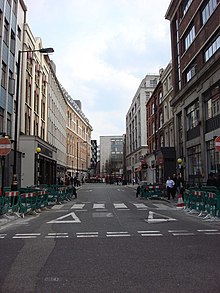 [Photo by Oxyman, {from Wikipedia}]

It appears Alexander may have headed to Victoria after gold during the 1850s, as did many South Australians.  The first gold to be found in Victoria was in 1851.

There is an unclaimed letter addressed to Alexander Barreau which was ‘lying at the Post Office at Forest Creek’, according to the Victorian Government Gazette, June, 1852, p.874.  Forest Creek is modern day Castlemaine.

He must not have stayed for too long as his wife (Elizabeth Hamilton) another child in June 1853.

From the Adelaide Advertiser:

Today is a big day for all you Dawsons and connected families. It is the wedding anniversary of our great grandparents. On this day in 1896, Edward Dawson and Maria Louisa West married in Gosport, Hampshire, England. They emigrated to Australia in 1905. Their son, Cyril, married Clara Bertha Barreau and established a farm near Lock, SA.